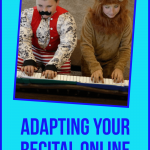 If your head wasn’t already spinning from having to adapt to online lessons, the “hot topic” right now seems to have shifted to holding an online recital. Recitals are a ton of work as it is, and then to add in a whole new way of doing things, it can be major overload. So how should you move forward?

Well the great news is there is no wrong or right way! There are a quite a bit of options, so the only thing to figure out is what works best for you and how much time do you want to spend.

One option is to do a “live” option through Zoom or another online platform. Rosemarie from The Unfinished Lesson has been testing this out with several other teachers, so I will suggest that you check back on her blog when she shares the details. Another option that was suggested to me several weeks ago was from a friend of mine, Valerie Merrell. She threw in the idea to do some kind of driveaway recital. This is something she was considering doing. Because I was planning an ensemble recital this year, she suggested I take out two keyboards or digital pianos, placing them at least 6 feet away from each other and then wiping down the keys between performers. I thought this was a great out of the box idea, except I didn’t have two “mobile” pianos…

Then there is the recorded recital. This is the option I decided would be the best for me since my recital was all duets/trios. I didn’t want to change the style of my recital because 1) I had already bought the fantastic music, most of which was specially written by composer, Lisa Donovan Lukas 2) My students were already working hard on their part.

So I thought I would share the run down on preparing my students, guidelines for my parents and how I am encouraging active participation for recital day.

As I mentioned earlier, my students have been working on their part for their duet or trio. Part of that preparation was to practice along with their part as well as their partner(s) part, through audio recordings that I uploaded to their *Tonara account. This was re-inforced that this was a must, because NOW they were going to be using one of those recordings (specified to them), to play along with when they film their performance video.

In the meantime, I emailed my parents that our recital would still be on the same day/same time but would be held online instead. I let them know that I wanted students to dress up in a circus recital theme or theme of their piece so they could start looking around the house for some ideas. I then gave them a week by week breakdown of what students should be doing each week to prepare and the deadline (a soft and hard) to submit their recording. I even created a video example to show what I was looking for in terms of filming views. 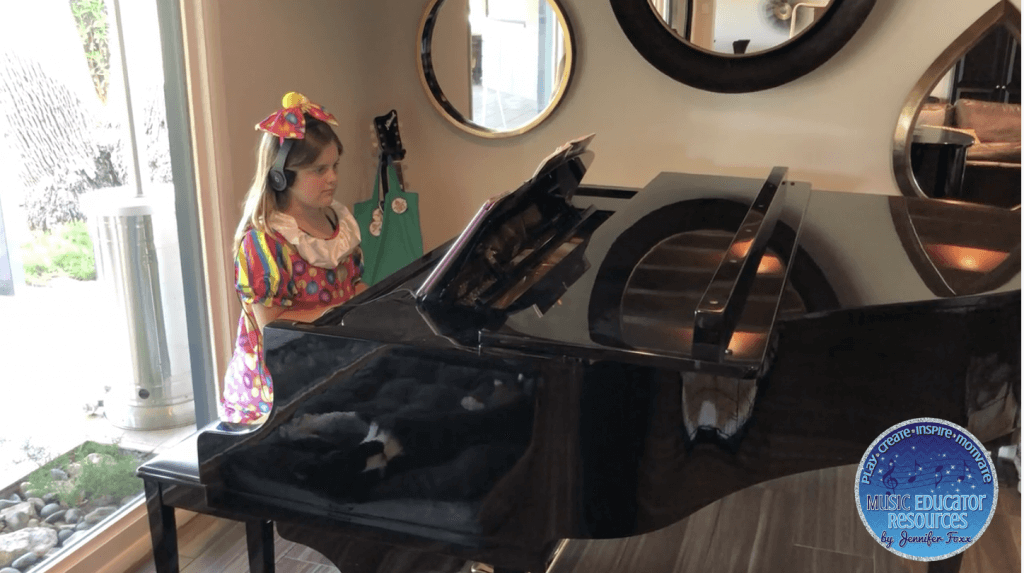 I thought it was important to be very specific in the guidelines that I am looking for before parents submitted their videos. These are the guidelines I shared…

If you have any questions, please let me know. Videos should be submitted no later than (gave a deadline that allowed me a week and half to edit). Please submit as early as you are ready, so I don’t get a flood of last minute submissions.

Awe! The behind the scenes of the teacher preparation is so much fun! I knew when I decided that I was going to move forward on an ensemble style recital that meant a lot more work for me. But I’m hoping that in the end it will all be worth it. I have already started to receive some submissions and can’t help but grin from ear to ear when I watch them. I’m counting on that feeling to overwhelm any frustration I may have as I edit.

Parents are uploading their videos to a dropbox link that I shared with them. As I grab them and download them to my computer, I erase them from my dropbox account so it doesn’t eat up my memory. Most of the video file sizes are probably small enough to even email or text but I didn’t want any compression whatsoever which is why I went this route.

I am editing in iMovie. Once the editing is complete I will upload the full video to the studio YouTube account as an unlisted link until our recital.

To encourage active participation on our recital day, I decided to keep our recital at the same time I originally had it scheduled. I originally thought about holding a watch party on Facebook, but then found out in my research that you can only hold a watch party if the video is uploaded directly to Facebook. (You cannot do a traditional Facebook watch party with a linked video)  I also remembered that Facebook drastically compressed videos and quickly realized that is not the way I wanted to go.

Because I can’t do a traditional “watch party” on Facebook, I decided to create a Facebook Event. Inside the event page we will be holding an “event” watch party. This is where I will upload the YouTube link right before our recital time and families are encouraged to give virtual applause, high fives and comments. If there are family members that can’t attend during our watch party time, they can still access the event later by simply clicking on the direct link to the event or going to their Facebook dashboard where they will click on “events” and then click “past”. Of course, they need to join the event to be able to see it in their past list. If there are any families or family members that aren’t on Facebook, I will simply give them the link to the YouTube video so they can access and watch it. 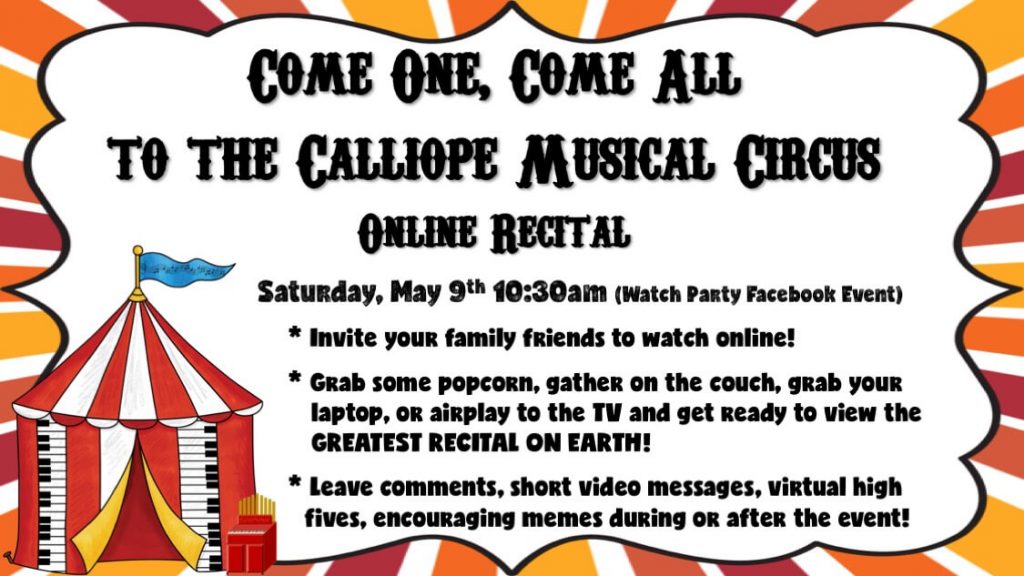 Because my recital isn’t until May 9th, I will have to report back and let you know how it went. But in the meantime, I wanted to share how I am doing things and hope that it helped some of you. I know we would all love to hear how are holding your online recital. Just leave a comment below… 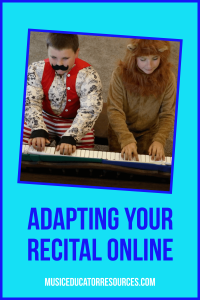 Now head on over to Part 2 of Adapting Your Recital Online! Where I share post recital details how everything ended up playing out.

*I am a supportive affiliate of Tonara. If you want to give it a try, make sure you use the code: musiceducatorresources20 for 20% off your first year.