I always love when I hear about a unique idea for a game that helps students learn, explore or create in a gamified way. MUSIC is a card game based on chords and chord progressions.  The deck comes with 6 suggested games, but you can even use the deck of cards as a songwriting or improvisation tool.

Steven Link, the creator of MUSIC… the Card Games shared that the idea of the game came about when he was sitting at the piano searching for a new sound and trying to write songs with nothing to work from. He mentioned that he would always end up writing the same kind of songs with the same kinds of harmonies and felt that he needed something to stretch his boundaries.

The best things happen during those stretching moments and MUSIC… The Card Games was born.

There are 6 games included in the deck. Many of the games also have variation ideas. Each game has different goals. Some will use the roman numeral chord symbols and others will use note letters. 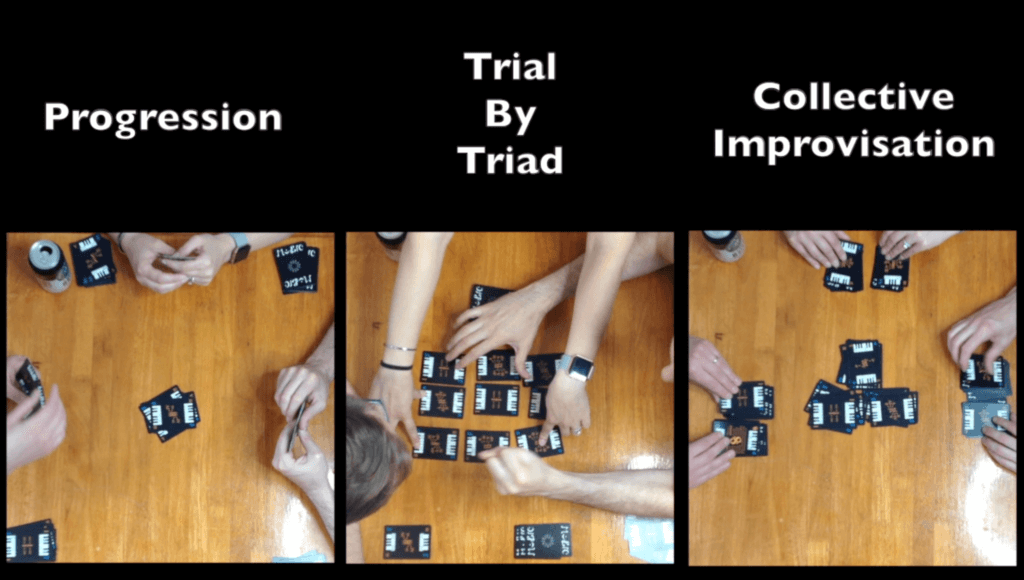 Progression- The game is played by building chord progressions using the roman numerals chord symbols. Similar to Uno, but with more strategy at play, the goal is to win the longest hands by being the last person to play a card.

Trial by Triad- This game uses the note letters. The goal is to find the highest number of 3-card combos and identify as many as you can. This one reminds me of a slap it game, but instead of slapping the triads that you spot, you shout it out and take the triad. Everyone is out for themselves in this game.

Collective Improvisation- This game uses the note letters. Placing major and minor chords, everyone plays their cards at the same time. The goal is to be the first to use up all of your cards.

4’33”- This game uses both the roman numeral chord symbols and note letters. Players start with one card, eventually creating a giant “crossword”  and identifying the mystery card within 4 minutes and 33 seconds. Maybe can play John Cage’s 4’33” for your “timer” while playing this game!

Circle of Fists- This is a bidding style game. Bluffing can also play a role in this game. Social “ensemble” play is a key component. The goal is to collect the circle of 5ths.

7th Heaven- A cross between “Go Fish” and “Rummy”, the goal for this game is to spell as many 7th chords as possible before the deck runs out. Just like Go Fish, if you don’t have the 7th, ask for it!

Optional Workbook- Also, available is an optional 39-page workbook that will guide you through music theory concepts you will need to be familiar with to play the games. It covers basics like the names of the keys on the keyboard, all the way up to spelling seventh chords, major scales, and chords dependent on the scales.

The games are a variety of what they call ensemble style or diva style. Ensemble style games incorporate teamwork and interaction. As you notice in Circle of Fists there may even be some bluffing! Diva style games mean that each player is focusing on their own hand. I love that there are both options depending on the game you decide to play.

The great thing about this deck of cards is that it is versatile. It opens up to other possibilities. Your imagination and creativity open up the possibilities of what you can do with his deck whether on your instrument or playing with a group.

You can purchase Music… The Card Games on their website. 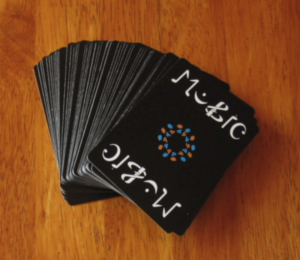