This year I had some other ideas and wanted to share because it turned out SO good! Okay, I know you are wondering…

What are summer practice packets?

In my studio, summer practice packets are digital packets that include so many pieces for students to learn (in this case I included 4), an individual video lesson to go along with the piece and some supplemental practice resources such as practice games, worksheets, practice charts, etc…

What were the summer options for families?

During the summer my students are required to take either a summer camp session or 2 summer workshops if they want to hold their spot for the fall. Some years it is a complete 8 hour camp, while other years I opt for workshops. The workshops are 4 hours each. 2 are required. This summer I decided to add in another option, which was a summer practice packet. 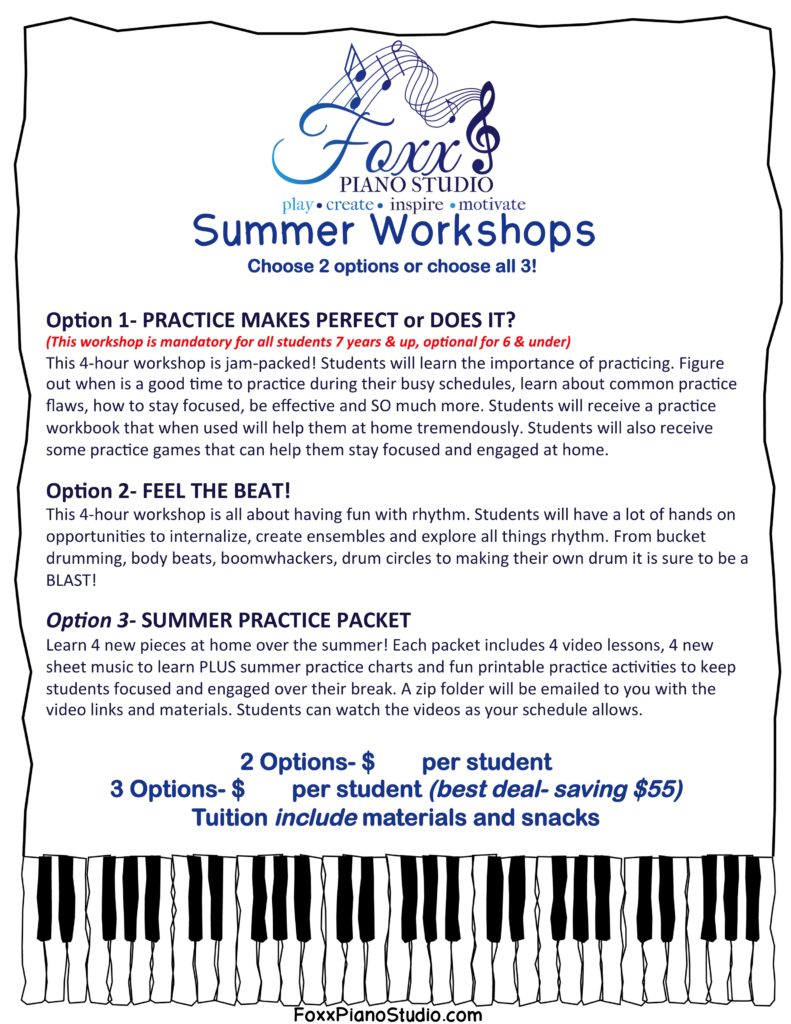 As you can see, I wanted all my students to participate in the Practice Makes Perfect or Does It? workshop (you can read more about that here), but for those who were busy or maybe just not interested in the Feel the Beat workshop, I gave an option to choose a summer practice packet instead. In addition, I also gave the option to take advantage of all 3 (2 workshops and a packet) and gave a discount if they chose all 3.

What were the results?

I had two families that chose all 3 options. Everyone signed up for the practice makes perfect workshop since it was mandatory and then half chose the Feel the Beat workshop and the other half chose the summer practice packet. But then things got interesting…

How were the packets organized?

In the end, I had 19 students (including my adult students) that received summer practice packets. Now, if I were to create 19 individual/customized packets along with the video lessons that would have taken me forever! Instead, I divided my students into what level they were in and then chose music (using unlimited reproduction licenses) based on those levels. I ended up with 5 different levels: Early Elementary, Elementary, Late Elementary, Early Intermediate-Intermediate and Advanced.

I then video taped 20 different lessons. (4 pieces per level) Lessons were on average about 6-10 min. each. So a few hours of total recording time. (For 19 students that isn’t bad at all) Of course there was the upload time where I uploaded all the videos to YouTube using an unlisted link after recording. I just worked on other things while the videos uploaded.

Then for each level I separated everything into folders. I put the video links in the READ FIRST file that you see in the picture below.

Because they would be getting several different folders from me, I compressed the folder into a zip file and then uploaded it to google drive. Then I emailed the link for the appropriate level to the parents. (Remember the 5 students who originally didn’t sign up for this option? I just sent them the link to the appropriate level- no extra time/work on my end)

In the end, I would definitely do this again next summer regardless if I do a camp or workshops. Summer practice packets were a definite win-win in so many different ways including keeping students playing during their break. The great thing about the packets is they can continue learning new pieces with my guidance but around their summer schedule. Like video lessons, summer practice packets have become a win-win in my studio!