Tech Tuesday: TMASG is BACK!!!

Great news iOS lovers! The Most Addicting Sheep Game is BACK!!!

This morning I woke up to a message in my inbox from Justin Southey, developer of the Most Addicting Sheep Game that the game was back. Justin was able to re-code the game which will make it easier for him to keep up with future support and updates. Keeping up is not cheap which is why the game took a backslide. But now with the new re-code it will make life a lot easier and that makes music teachers and students around the world VERY happy!

Justin, a musician himself had no idea that his game that he created for fun would be so popular among music teachers and their students. Because of this, he would like to make this game available in an android format. He has set up an Indiegogo fund to both help with this and to keep it running on the iOS format. If you are a fan of TMASG, you can now support in making this all happen here!

From the funding page…

Where does this money go?

“Your contribution will help keep TMASG alive by both ensuring its continued existence on iOS as well as funding the port to Android.

Secondly, an Android port has always somewhat scared me due to the vast number of devices that are available with greatly differing specs, both in terms of screen dimension and processor capability. Despite being a pet project, it is of utmost importance to me to release a product of exceptionally high quality. To do that, I need to test it, and to test it a lot. I would like to spend some of the funds raised on test devices and emulators.”

Haven’t heard of The Most Addicting Sheep Game? Well I’m telling you it is a MUST have and will become a student favorite FAST! Justin explains it like this…. “TMASG is a rhythm game. Side-scrollers are a dime-a-dozen on virtually every platform and while I think TMASG stands on its own two feet as a side-scroller, it’s the musical timing of the actions to the beat that really sets it apart.”

See it in action here…

Not only do students need the sheep to jump and roll on platforms without falling, but it must be done to the beat in order for them to be successful! This is what makes TMASG addicting and fun! Go grab it now! Have it already, go update! And spread the wonderful news!!! 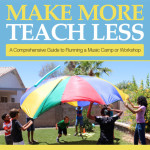 Ready to step out of the box and do a summer camp this year? Check out the new Make More, Teach Less video course. It’s a comprehensive guide to help you run a music camp or workshop.

For monthly freebies and specials be sure to sign up for the Music Educator Resources newsletter here.