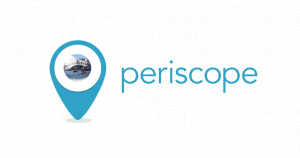 Awhile back ago, I had heard about Periscope through Mario Ajero. He was going to use it for one of his kids piano concerts or something if I remember correctly. At that time, I downloaded the app but didn’t do more than that.

Fast forward a little bit and after returning from the TpT conference in Vegas last month Periscope became a hot topic among the teachers. So I thought I would look a little more into it. I created an account and then started following a few people. This last month I’ve been able to get a taste of what Periscope is all about from watching a bunch of them. I’ve watched anything from magic tricks, tours in London, a brief tour in a museum, teacher tips, product features, a panel presentation and even got to listen to a wonderful keynote address at a conference I never would have even gone to!

What is Periscope? Periscope was purchased by Twitter last March from Kayvon Beykpour and Joseph Bernstein who developed it. Their tagline says “Explore the world in someone else’s eyes.” Periscope is a free live video streaming app (available in the iOS app store or Google Play store).

Who can view the scopes (videos)? Users of Periscope are able to choose whether or not to make their video public or simply viewable to certain users such as their friends or families. This is important to me because I noticed that every once in awhile when I’m watching a scope, trolls can pop in. They can easily be blocked right away, but their message was already out. If I decided to periscope a recital for example, I would probably not use the public option and just limit it to family and friends. Another tip: deselect the location button before starting your broadcast. If you don’t share your location, your scope isn’t shared on the map and you’ll get a lot less trolls. Plus it’s just more safe to do anyway…

Can the viewers interact with the broadcaster? Scopers (aka viewers) can type in messages. The broadcaster won’t be able to hear the the scopers but can read the messages. As a scoper, I found the message were sometimes an annoyance depending what I was watching. Because the messages could easily fill up the whole screen which makes it hard to view what the user is filming. Scopers can also send “hearts” to the broadcaster by simply tapping on the mobile screen as a form of appreciation. Giving them some “love”.

How long is the broadcast available to view? Scopes are only available 24 hours after the broadcast goes live. So if it is something you want to see, you must catch the replay within the first 24 hours or you will miss it.

Okay, now with anything social media, there is the lingo you should know for periscope…

The only thing I really don’t like about Periscope is anyone can follow you. I wish there was an option to make an account private where you approve your followers. There are some things I might just want piano teachers for example to view. I know I can use the share option for family/friends but even with this option my guess is trolls can still make their way in regardless when you broadcast if they are a follower. Though once they are blocked you are okay.

There are two things on my wish list that I wish Periscope showed/allowed. Both of them could easily be done since they both have to do with watching the scope after it’s recorded. 1) I wish it show me how long a broadcast is (if there is a way to do this and I’m just not seeing it, let me know). This is mostly for me to know if I have time to watch the entire scope when I go into it. 2) I wish I could fast forward or rewind if I’m not watching the broadcast live.

You can sign up with Periscope in two ways. First, you can use Periscope in conjunction with your Twitter account (I didn’t realize this when I set mine up). The advantage of this is Twitter will give a shout out to your Twitter followers that you are live. If you didn’t initially set this up  through Twitter, there is an option to share your broadcast on Twitter in the app itself if I remember correctly. If you don’t set it up in conjunction with your Twitter account, you can create a Periscope account by using your cell phone number.

Like anything on social media there is a lot of “junk” out there on Periscope. Just stay away from the junk and follow those you are familiar with. You actually don’t even have to follow someone to view their periscope if it is public. You can check them out and if you like what you see, then follow. The big reason I like to follow is so Periscope can alert me when there is a broadcast that goes live. If I can’t watch it live, I make a mental note to check it out later- within 24 hours.

So… Do any of you use Periscope? Leave your scope name below so I can follow you! How do you use Periscope? Do you have any other tips you can share? Please leave comments below. And again, feel free to follow on Periscope. One of these days I may just be brave enough to try it. 😉

In the meantime, I am doing more video’s this year on my YouTube page so while you are at it feel free to follow me on YouTube too!