Each year I try to have at least one composition project for my students to work on. Over the years we have enjoyed doing creative story compositions. This year my students and I had a SUPER time with the A.N.T.H.E.M. program. Because of the superhero theme, I wanted to put a different spin on the story idea and have students create comic strip music compositions. Anytime I can encourage students to use their imagination it is a win!

With comic strip music compositions, students began by creating a comic strip story. I go through the steps with them with the different styles and elements to consider. Once they have that in place, then it was time to draw the comic out. After they finished their drawing, it was time to add in their music or sounds to go along with their comic story and drawings. Because I wanted them to experience the comic strip MUSIC composition, I took their final comic strip composition and edited a short video using iMovie.

Here are a few studio favorites! (It was so hard to pick!)

Included in A.N.T.H.E.M. (also available separately), Comic Strip Music Composition can be used in a camp or workshop setting, a music lab project, a classroom project or a supplemental activity. I would recommend giving students at least 4 hours (or more) to work on their comic strip composition. Some students need more time to come up with a comic story idea, while others may need more time with their drawings.

Combining elements of storytelling, scriptwriting, storyboard, drawing and musical composition, the possibilities where students can go with this resource is up to the imagination! 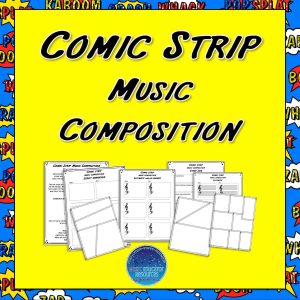