Me and Mr. Grasshopper

Yesterday I finished my Mozart time capsule. Did you know that Mozart had a pet grasshopper?

After winding down that evening I was watching TV and all of the sudden I see something big flying into our kitchen. At first I thought it was a hummingbird. He landed inside one of my plants that sits on top of our kitchen cabinets.

So I first waited to see if he would fly again but nothing. Finally I got up to see where he could have gone and after further investigation found that it was a grasshopper. 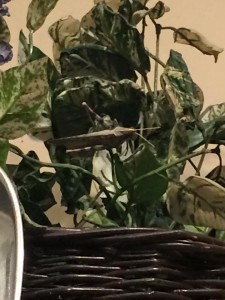 Can you spot him?

All of the sudden the grasshopper started flying and hopping all over the kitchen and family room. You can imagine what I was doing. So now the predicament was, how on earth do I get this grasshopper out of the house?

Well naturally, I opened the back door for Mr. Grasshopper to leave but he had no interest in leaving whatsoever. So then I grabbed a broom and started patting the plant to where he had flew back. Nothing. I could see him so I knew he was there but he was not going to budge.

Well if he wasn’t going to budge this would actually work to my advantage. I picked up the plant and very carefully and quietly walked it out to the back porch, making sure I closed the door behind me. I shook the plant a little and out dropped the grasshopper. Just when I was about to go inside, he starts hopping over to the door. “Let me back in!” I could almost hear him saying. Luckily, I was able to catch him off guard and quickly snuck inside and shut the door.

For 2 hours Mr. Grasshopper tried to get back inside but I was not going to let him in! You can say he was hopping mad!

Mozart might have had a pet grasshopper, but I don’t think I will be getting one anytime soon. 😉